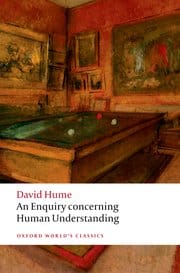 ‘Commit it then to the flames: for it can contain nothing but sophistry and illusion.’

Thus ends David Hume’s Enquiry concerning Human Understanding, the definitive statement of the greatest philosopher in the English language. His arguments in support of reasoning from experience, and against the ‘sophistry and illusion’ of religiously inspired philosophical fantasies, caused controversy in the eighteenth century and are strikingly relevant today, when faith and science continue to clash.

The Enquiry considers the origin and processes of human thought, reaching the stark conclusion that we can have no ultimate understanding of the physical world, or indeed our own minds. In either sphere we must depend on instinctive learning from experience, recognizing our animal nature and the limits of reason. Hume’s calm and open-minded scepticism thus aims to provide a new basis for science, liberating us from the ‘superstition’ of false metaphysics and religion. His Enquiry remains one of the best introductions to the study of philosophy, and this edition places it in its historical and philosophical context.