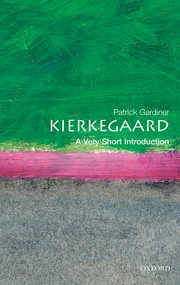 Soren Kierkegaard (1813-55), one of the most original thinkers of the nineteenth century, wrote widely on religious, psychological, and literary themes.

This book shows how Kierkegaard developed his views in emphatic opposition to prevailing opinions. It describes his reaction to the ethical and religious theories of Kant and Hegel, and it also contrasts his position with doctrines advanced by men like Feuerbach and Marx. Kierkegaard’s seminal diagnosis of the human condition, which emphasizes the significance of individual choice, has arguably been his most striking philosophical legacy, particularly for the growth of existentialism. Both that and his arresting but paradoxical conception of religious belief are critically discussed, and Patrick Gardiner concludes this lucid introduction by showing how Kierkegaard has influenced contemporary thought.