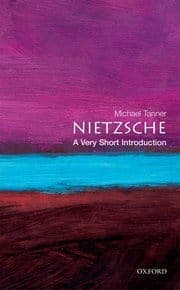 The philosophy of Friedrich Nietzsche (1844-1900) was almost wholly neglected during his sane life, which came to an abrupt end in 1889. Since then he has been appropriated as an icon by an astonishingly diverse spectrum of people, whose interpretations of his thought range from the highly irrational to the firmly analytical. Thus Spoke Zarathustra introduced the ‘superman’ and The Twilight of the Idols developed the ‘Will to Power’ concept; these term, together with ‘Sklavenmoral’ and ‘Herrenmoral’, became confused with the rise of nationalism in Germany.

Idiosyncratic and aphoristic, Nietzsche is always bracing and provocative, and temptingly easy to dip into. Michael Tanner’s readable introduction to the philosopher’s life and work examines the numerous ambiguities inherent in his writings. It also explodes the many misconceptions fostered in the hundred years since Nietzsche wrote, prophetically: ‘Do not, above all, confound me with what I am not!’