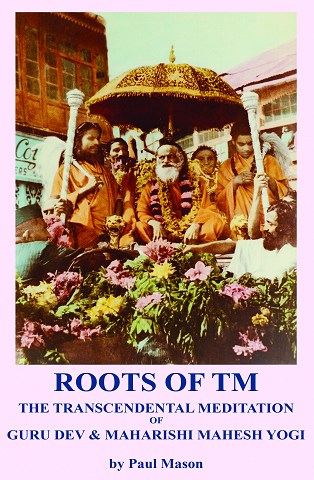 ‘ROOTS OF TM’ enables readers to better understand how and why Maharishi Mahesh Yogi spread the teaching of Transcendental Meditation around the world.

‘ROOTS OF TM’ provides background information on Maharishi Mahesh Yogi and his master, Guru Dev, Swami Brahmanand Saraswati, and provides a source book of information about their teachings and techniques.

‘ROOTS OF TM’ is not intended as a general guide to Indian philosophy, or as a study of the many ancient spiritual practices of India, nor as a mantra handbook.

‘ROOTS OF TM’ contains numerous quotations and rare transcripts of lectures by Guru Dev and by Maharishi. Furthermore, it details the course of events that would eventually find Maharishi lecturing at the Masquers Club, an actor’s social club in Hollywood. It also tells how Maharishi came to adopt a businesslike attitude to financial matters, and how he planned to create a headquarters in the Himalayas where he intended to train others to teach transcendental meditation.

‘ROOTS OF TM’ digs deeply into rare materials in order to give detailed profiles of the teachings of both master and disciple, thus affording readers an opportunity to make informed comparisons of both these teachers’ methods and their objectives.