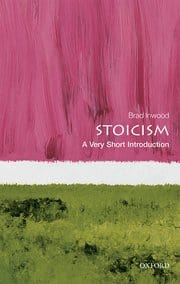 Stoicism is two things: a long past philosophical school of ancient Greece and Rome, and an enduring philosophical movement that still inspires people in the twenty-first century to re-think and re-organize their lives in order to achieve personal satisfaction. What is the connection between them?

This Very Short Introduction provides an introductory account of Stoic philosophy, and tells the story of how ancient Stoicism survived and evolved into the movement we see today. Exploring the roots of the school in the philosophy of fourth century BCE Greece, Brad Inwood examines its basic history and doctrines and its relationship to the thought of Plato, Aristotle and his successors, and the Epicureans. Sketching the history of the school’s reception in the western tradition, he argues that, despite the differences between ancient and contemporary Stoics, there is a common core of philosophical insight that unites the modern version not just to Seneca, Epictetus, and Marcus Aurelius but also to the school’s original founders, Zeno, Cleanthes, and Chrysippus. Inwood concludes by considering the place of Stoicism in modern life.