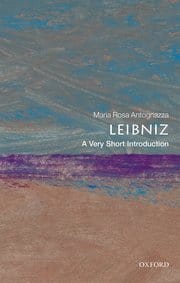 Gottfried Wilhelm Leibniz (1646-1716) was a man of extraordinary intellectual creativity who lived an exceptionally rich and varied intellectual life in troubled times. More than anything else, he was a man who wanted to improve the life of his fellow human beings through the advancement of all the sciences and the establishment of a stable and just political order.

In this Very Short Introduction Maria Rosa Antognazza outlines the central features of Leibniz’s philosophy in the context of his overarching intellectual vision and aspirations. Against the backdrop of Leibniz’s encompassing scientific ambitions, she introduces the fundamental principles of Leibniz’s thought, as well as his theory of truth and theory of knowledge. Exploring Leibniz’s contributions to logic, mathematics, physics, and metaphysics, she considers how his theories sat alongside his concerns with politics, diplomacy, and a broad range of practical reforms: juridical, economic, administrative, technological, medical, and ecclesiastical. Discussing Leinbniz’s theories of possible worlds, she concludes by looking at what is ultimately real in this actual world that we experience, the good and evil there is in it, and Leibniz’s response to the problem of evil through his theodicy.