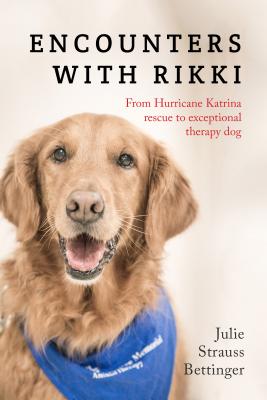 Encounters with Rikki is about an eight-week-old puppy surviving Hurricane Katrina and miraculously finding her calling as a therapy animal. With her new owners, Chuck and Patty Mitchell, Rikki helps children learn to read, assists a man with multiple personality disorder and gives one little girl the courage she needs to testify against the man who raped her.

This narrative nonfiction book explores the human-animal bond through Rikki’s influence on her owners and the people they visit: people who are dying, accident victims with brain injuries, and those committed by law to a psychiatric hospital. Chuck and Rikki’s improbable partnership is one ofloyalty and affection, leading Chuck on a mission to help child victims testifyby having a dog at their side. It’s as much a story about the dog as itis about the possibilities that she has inspired, including changing thejudicial system in Florida. Encounters with Rikki shows how theright combination of dog and handler can lead to profound results.

The adventure begins after Chuck Mitchell and his wife Patty reluctantly adopt the ailing victim of Hurricane Katrina, only to discover the GoldenRetriever has a gift that somehow aids the healing of people she encounters. The puppy they name Rikki Lake Pontchartrain leads them on aremarkable exploration bringing Animal Therapy to schools, homes for the dyingand an institution for the mentally ill. Through Rikki’s influence, a deaf-mute man with multiple personalities overcomes social isolation, stroke victims walk and severely autistic children stop hitting their therapists and start petting Rikki.

Central to the narrative is Chuck and Rikki’s work helping a child gain courage to testify in a trial involving a close family friend who raped her while babysitting the five-year-old. The case earned Rikki a place in historybooks: she was the first dog to be used during a Florida deposition andalso inspired a law. In 2011, Florida became the first state in thenation to allow dogs to accompany young victims in the courtroom when theytestify.

The main human character in this book, 62-year-old ChuckMitchell, is a driving force behind expansion of Animal Assisted Therapy nationally. It has become one of his many unconventional pursuits. While on a full-ride swimming scholarship, Chuck wrote his senior thesis on “utopian communities.” He ditched a Fellowship toearn a Ph.D. at Yale to instead establish a 240-acre land cooperative, where hestill lives with his wife of 31 years. In addition to being a successful commercial building contractor (now retired), Chuck rescued a manufacturing operation he helped to organize when the CEO died and he is one of the rareindividuals to sue Wal-Mart and win. These events made him the subject of two national business magazine articles. Before retiring at age 53, Chuck served aschairman on bank boards, a regional hospital and gave generously of his timeand resources to nonprofits.

A growing number of popular media have offered glimpses of this Animal Therapy specialty, but so much of the story has been left out. And for good reason. Only a small subset of society works in the field of child sexual violence. It’s a closely guarded world with rules, procedures and protocols. Inthe name of justice, a child as young as four years old must recall facts aboutan event that she’s desperately tried to forget. She must come face-to-face with the adult who violated her body, introducing terror into her storybook world. The entire drama typically takes place against a backdrop oflinoleum floors, hard wooden benches and somber moods.

Yet, under the influence of Therapy dogs, this same frightened, wary child who is having trouble recalling facts, becomes relaxed and able to think more clearly. The dog becomes a tool to build rapport between the child and attorneys, to get the truth out during depositions, hearings and perhaps even atrial.