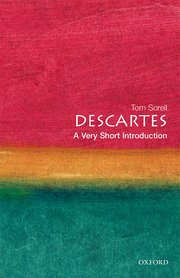 René Descartes (1596-1650) had a remarkably short working life, and his output was small, yet his contributions to philosophy and science have endured to the present day. He is perhaps best known for his statement ‘Cogito, ergo sum’. By a mixture of ‘intuition’ and ‘deduction’ Descartes derived from the ‘cogito’ principle first the existence of a material world.

But Descartes did not intend the metaphysics to stand apart from his scientific work, which included important investigations into physics, mathematics, psychology, and optics. In this book Tom Sorrell shows that Descartes was, above all, an advocate and practitioner of a new mathematical approach to physics, and that he developed his metaphysics to support his programme in the sciences.