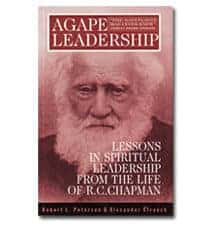 Agape Leadership promises to be one of the most spiritually inspiring books you have ever read. Robert Cleaver Chapman (1803-1902) provides an extraordinary example of Christ-like, loving leadership. Although little known today, he was a widely respected Christian leader in England during the last century.

Chapman became legendary in his own time for his gracious ways, his patience, his kindness, his balanced judgment, his ability to reconcile people in conflict, his absolute fidelity to Scripture, and his loving pastoral care. By the end of his life, Chapman was known worldwide for his love, wisdom and compassion. He became so well known in England that a letter from abroad addressed only to “R. C. Chapman, University of Love, England” was correctly delivered to him! In Agape Leadership, you will see godly, pastoral leadership in action through these biographical snapshots from Chapman’s life.